« Previous "REEDS AND SEEDS" Next "FREEDOM IS IN THE MIND" »
SUCCESS
2006
DSM JINLING, NANJING, CHINA
1,80 METER HIGH
POLYESTER, COLOURED, ON A STEEL BASE 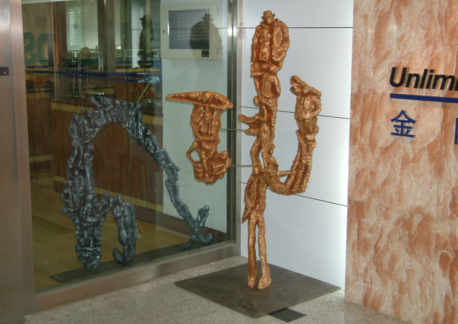 The theme for this sculpture was: “Inside-Outside, teamwork for success”. This theme was enrolled by having painted the two Chinese characters for Success by a famous Nanjing calligrapher. From 5 examples Hans Mes chose one calligraphy that expresses best its power. After that the calligraphy was used to transform it into a three dimensional form in composite resin. In the first Chinese character DSM employees are sculpted in various actions and attitudes. In the other DSM customers are represented the same way. The first character has colour tones from deep black up to silver metallic blue. Blue is the company colour of DSM. The other character has a colour set varying from dark yellow to gold. Yellow and gold were chosen because they are the Chinese emperor’s colours and also because the customer is king. The sculpture symbolizes the ties between DSM and its customers and the success and character by which the company pursues its goals.