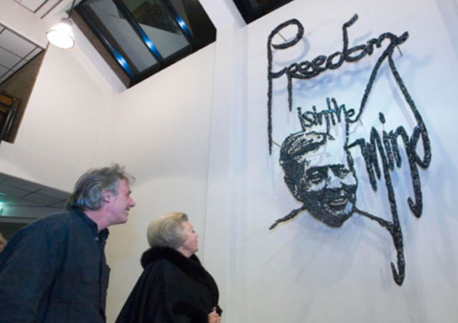 This sculpture, inspired by a quote of the late Prince Claus of the Netherlands was presented in the presence of H.R.H. Beatrix, Queen of the Netherlands at the opening of the Prince Claus Conservatory in Groningen, Holland. The artwork is a composition of 3-D calligraphy, musical notes and a light source that projects the portrait of Prince Claus on the wall of the entrance hall. Because Prince Claus had a reflective, warmhearted character and always has been encourageing many musicians and music students by his gentle, personal touch, he will always be estimated high in the hearts of the Dutch people. The quote Freedom is in the Mind is from Prince Claus and sculped as a calligraphy. Some of the text’s characters form the notes of a score. By the gracious lines the rhythm and impression of music express the close involvement of prince Claus to music and music education. The flags on top of the notes lend them a sparkling touch of freedom.The portrait’s soft shadow and the calligraphy’s handwriting style emphasize this remarkable attitude by transforming his special character and the flow of music into a symphony of the hearts in which Prince Claus has found a place forever.