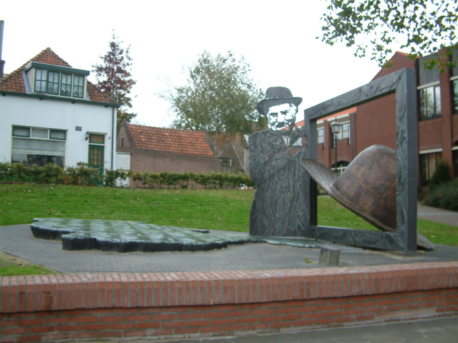 Southern Seascape is a tribute to the late Eibert den Herder, founder of many tourist attractions that made the economy of the municipality of Harderwijk florish today. Den Herder was the renowned activist of his days attempting the closure of the former Southern Sea, which after that became a fact, brought lots of new land to Holland because of this dyke. By setting new commercial goals for his business Den Herder succeeded to get a new harbour entrance for Harderwijk and created a beach with the dug out sand. He also founded the Dolphinarium: From his passion for the sea as a former trader in the fishermen’s surplus catches and as an amateur painter of ancient ships of the former Southern Sea his interest is clear. The sculpture now represents the well known man with the hat holding a painting of his views, framed by the symbols of his achievements (in coated steel), thus closing the Southern Sea (green marble) that seems to run empty because of the slope of this surface. In the frame a large bronze hat (hoed in Dutch) symbolizes the protection of his people (hoeden in Dutch). But this funny part of the sculpture may also mean “Chapeau”, the word French people exclaim when expressing praise.