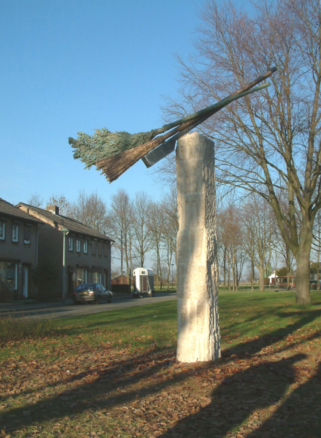 An old stone border mark points back to the times that the village Siebengewald was a village located on the sandy hills at the closed border between Holland and Germany. On top of this are three elements. A branch of the so called “Sevenboom” after which the village was named made of green bronze. A heath land brush which was made by the villagers to ensure some income in the past. An open barrier from the former border, which recently disappeared because the European Union’s won’t control the intern borders anymore. These three forms are bundled to make them look like a wing to symbolize that the village will always fly like a bird over any border into the future but still keep its very own characteristics.