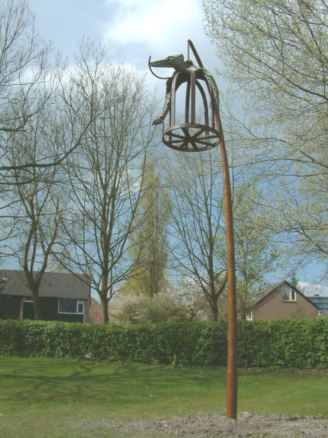 The sculpture Outlawed is a group of sculptures for the Vinkhuizen neighbourhood in Groningen, Holland. The name Outlawed (Vogelvrij in Dutch, literally Bird Free) originally was used for corpses of execution that were not allowed to be buried but left as food for birds. It refers to those who are put out of the protection of laws and given to anybody’s prosecution. Three opened cages give expression to this theme, each from a different point of view. In the first sculpture the bars of a medieval torture cage in which people were hanged to the ceiling are torn apart by a monster. The second sculpture shows an opened bamboo cage with a large feather. In the third cage an open eggshell is left with the door of the cage opened. The meaning of Outlawed is not simple or straight to explain. Everybody has his or her own thoughts and experience in relation to the subject of these sculptures. That is why people should use their freedom to know or discover the symbolic meanings themselves.