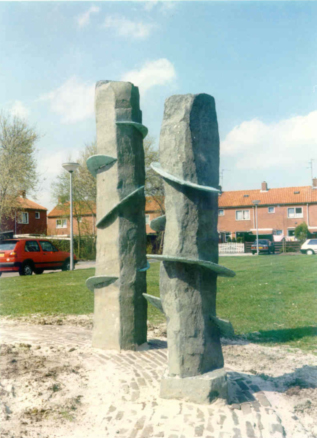 Clay Press is the name of this sculpture that was placed at the neighbourhood of Tichelwerk in Oostwold, Holland, where a former brick production plant was active. The production of clay to form the bricks was done by putting clay in a large so called Screw of Archimedes (an ancient Greek inventor). In fact this is a pipe in which is a centre axis supplied with scew blades. By rotating this screw a string of clay is pressed out to be cut in slides and put in forms for drying and baking. Because this location is in the North Hans Mes used the blue basalt column which is like the colour of the local sea clay and the green for the press blades because in ancient times there was a wood up here. The basalt was also chosen because of the resistant attitude of the villagers up here.