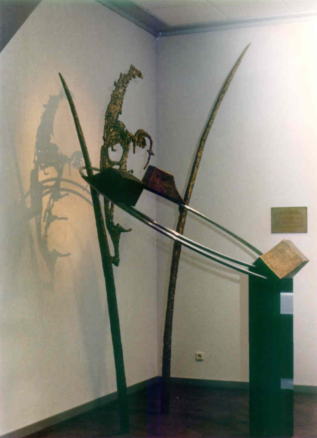 This portrait of Horowitz, which consists of the shadowed surfaces of the face, reveals its sudden recognition as an expression of the inventor’s spontaneous inspiration. Horowitz was an open and acute man. He mostly developed his ideas in a dialogue with his environment. That’s why Hans Mes chose for an open portrait with sharp, almost graphical elements. The attachment to and oneness with his idea is implemented by the circular form of the portrait. A reproduction of the shaving principle as developed by Horowitz has been placed around it. Therefore two hairs and the three bronze chisels he applied have been used as sculptural forms. The worldwide spread of the Philishave and its rotating shaving system have been accentuated by two oblique circles. Horowitz considered his idea and not himself as being important. Thus giving the artist reason to locate the idea on a socle whilst leaving the person in the centre. By giving the black granite socle the shape of Philishave’s ‘phone hook-model’ a link has been made with today’s innovation. The spotlight on the portrait of Horowitz becomes visible as the shadow of the man who invented for the man inside.