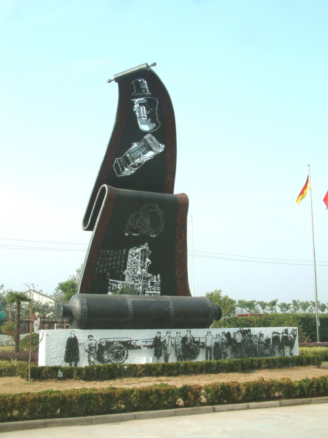 Theme for this huge artwork was “Excellence through Tradition”. Hans Mes chose an approach with recognizable links to both Chinese and European culture. He combined two elements: An ancient photograph from the early days of Oschatz and an ancient Chinese scroll, thus pointing back at both the Oschatz and the Chinese history. On the old photograph the round vessel form is being pulled by horses together with handicraftsmen from those days as founding workers. They are placed on both sides in contrast with an 8 meter long white wall. The scroll starts as this ancient vessel as shown on the old photograph to emphasize that the historical excellence of Oschatz was enrolled from this very beginning.The scroll shows a gracious flow of paper that symbolizes the moves in Chinese Tai Chi and a similarity between the curved pipe in the company logo and the particular curves of the paper. The poem that Hans Mes wrote about this sculpture was translated into classical Chinese poetry and welded as a Chinese calligraphy on the scroll. The Chinese scroll has decorated edges of red flames on a black metallic background. Black and red are the typical Oschatz company style colours. The tough approach and impressive size of this monumental sculpture emphasizes the character of the huge products produced by Oschatz Nanjing