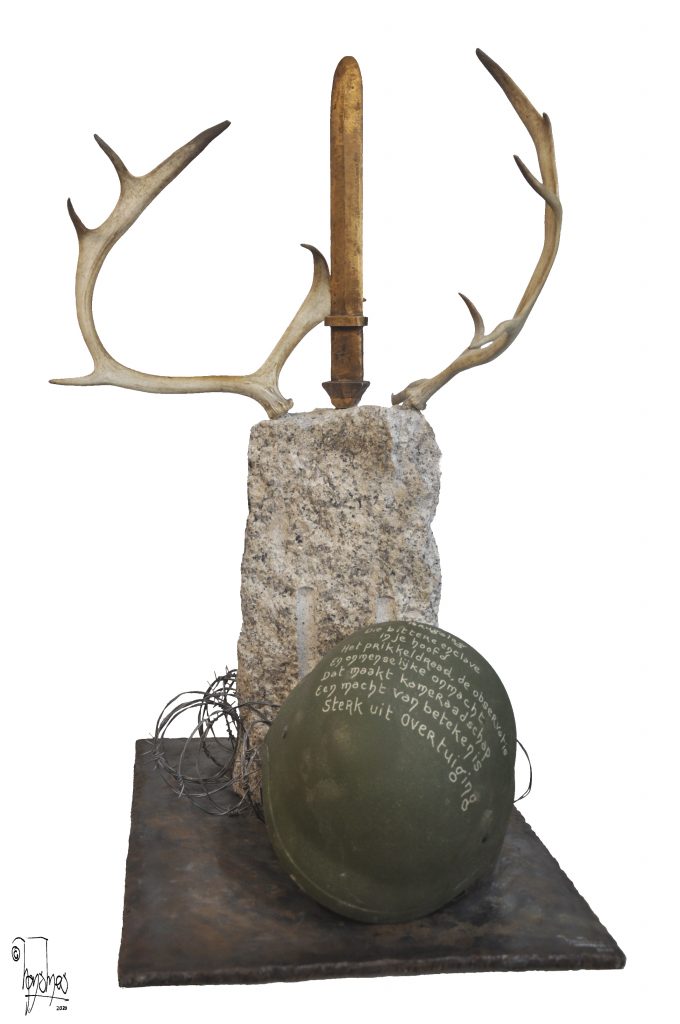 That bitter enclave in your head

The barbed wire, the observation

A power of significance

Sculptor Hans Mes made the artwork “Recoil” for the project “Helmets Full of Stories”. Young veterans are linked to artists. In this context, Edo van den Berg, a veteran of Dutchbat III, was linked to the artist Hans Mes. He then visualized his poignant story about the UNPROFOR peacekeeping mission in the Bosnian enclave of Srebrenica, where an unprecedented drama unfolded. The artwork “Recoil” consists of a spatial composition of various visual elements, each with its own expressive power. A chopped and hewn block of white granite has been placed on a base of corroded steel. The steel is reminiscent of the rusty steel of the factory complex on the compound where Dutchbat III was stationed. Due to its color and structure, the granite symbolizes the ruins of houses that have been destroyed. A roll of barbed wire has been placed around the granite as if it were a barrier. The granite, the steel and the barricade thus sketch a memory that remains indelibly etched in the veteran’s memory as a reflection of what happened. It is these traumatic experiences that leave a mental enclave, barred and trapped in impotence due to the incomprehensible lack of support and abandoned by all parties involved. A helmet, in which the above poem is engraved, stands against the barbed wire fence. The poem on this helmet expresses what stays with the Dutchbat soldier and what he must continue with. The antlers of a red deer and a brass sword are placed on top of the block of granite. The antlers for thrusting and the sword for fighting together form the emblem of the 13th Infantry Battalion Regiment Combat Forces. This emblem adorns the red berets of Dutchbat III that were stationed in the enclave. The antlers and sword not only symbolize the Combat Troops, but they also refer to their weapon motto: Strong by Determination. It’s a weapon spell that speaks volumes about how to deal with this disastrous mission. It is that approach with which Edo van den Berg, after his return to the Netherlands, managed to overcome the most difficult period of his life by trial and error.