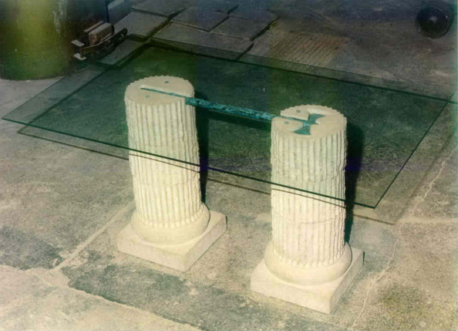 This is not a table but an artwork that can be used as a table. Two Greek Dorian columns carry a socalled Labrys, which is a ancient Minoan ax from the isle of Crete. The columns are covered by a plate of glass. The sculpture tells the story of Daidalos, the mythological Greek inventor who left his workshop in Athens and moved to Crete to work for king Minos. But he wanted to free himself from what became almost an captivity and escaped with his son Icaros to Sicily on self made wings of feathers stuck together by wax. Each respective column stands for the workshop in Athens and that in Crete. The ax symbolises the tools that Daidalos left behind. And the glass plate expresses the invisible border he had to cross to regain freedom while loosing his son. This particular meaning of the sculpture was given for a personal reason by the art collector to express a new found freedom.