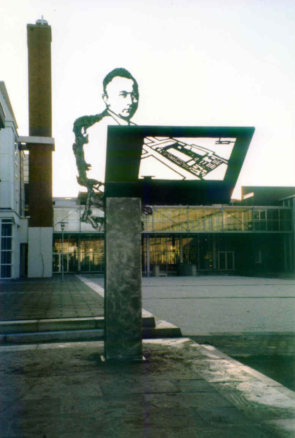 The sculpture Jan Gerko Wiebenga is a tribute to the architect of this building of the Hanzehogeschool and his influence on architecture. Hans Mes chose elements that refer to the Technical School and Wiebenga’s innovative importance to concrete skeleton construction. The steel cut portrait shows the silhouette of Jan Gerko Wiebenga, seated behind his drawing board. Thus Hans Mes characterized a man who kept beauty as a high standard and in his time threw his shadow far before him as an architect and engineer. The drawing board, refers to the works of Wiebenga and the function of the building, to which a class for construction engineering was adapted. The board is a perspective is from the original design for Middle Technical School with workshops in Groningen. The portrait and drawing board are fixed to a column. This part refers to the crucial role both as an engineer and an architect that Wiebenga played in the development of concrete skeleton constructing which American technique was introduced by him in Holland. Surrounded by the classrooms of the Hanzehoogeschool the artwork carries the meaning of a fanatic designer behind his board.