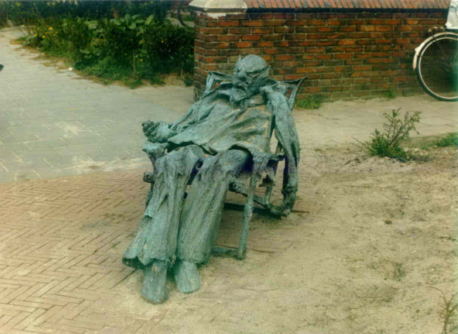 The street for which this sculpture once was designed is called Bataviastreet, named after the capital of Indonesia in the Dutch colonial times. It was placed after renovation of the street and its houses. Before that time many drug addicts lived here. Hans Mes made this Man in Armchair sitting like the colonials once did in Batavia. But the face of this man looks like a devil and in his hand is a coin. By sculpting this Hans Mes tried to express that the colonial man and the drug addict are doing the same thing. They colonialist exploits a country and a people and the drug addict exploits his body and the people around him. In winter time this sculpture suddenly wears a hat or a scarf. The people in the street kind of like this old man and children play on this sculpture. It’s history.