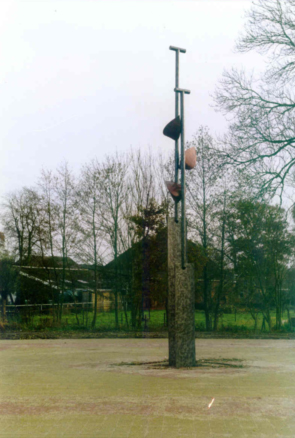 This sculpture shows two large peat spades and three buckwheat seeds. The spades were used to dig the peat in its typical long square form from the soil. After digging the top layer, the soil was mixed with sand and brought up again. The first product grown on this soil was buckwheat to fertilize the earth. Because of the peat digging system the form of the farmland was quite long, which also was a reason to use long blades for the spades of this sculpture. The colours red, used for the seeds, and black, used for the spades, are the village’s colours.